Seeing Red captures two realities of the border-turned-battleground between the United States and Mexico.

The big red Do Not Enter sign assaults the eye first. It’s the visual equivalent, to me, of Trump’s blustering, incendiary tweets about border crossers and immigration.

But look closer and there’s another red emblem: a tiny red crucifix. If border crossers near death in this inhospitable landscape, they often leave traces —shoes, tee shirts, photos, rosaries — in hopes that some evidence of their life will survive and be found. The crucifix reminds viewers of the human — or rather inhumane — consequences of the Do Not Enter animus that disgraces our nation’s true values. 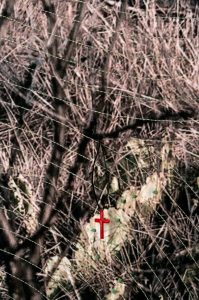